Fork me on GitHub
Bharadwaj

The Indian general elections are around the corner. For software engineers, this time around, there is data to play with and try to predict the outcome. Among all, the data from the social media giants - Twitter and Facebook - is easily accessible for analysis. Though social media may not be the right barometer to judge voter sentiments in a country as big and diverse as India, it is nonetheless a very tempting datasource for anyone curious. So couple of days ago I decided to do a small project - to simply chart the volume of tweets with strings like “modi”, “rahul”, “kejri” and “india” in it. I thought just a graph of volumes by itself will be interesting to see. So here I present the v1.0 of my Indian-general-elections-social-media-tracker!

The application has 5 different dashboards with a URL for each. Each of these 5 dashboard’s have 4 graphs - one for each string (india/modi/rahul/kejri). Here is a quick summary of each dashboard -

The graph may not appear if you are a behind a proxy which does not tunnel WebSockets (like behind some of the office networks). Also if a firewall blocks WebSockets. But in case you run into any of these issues, then you could use your mobile device to see the dashboard. Here is the screenshot from my Android Samsung S2 on my home Wifi. I also checked that the graphing works on my Airtel 2G network fairly well too (the dots in the image below are some mess-up by the mobile screenshot tool) 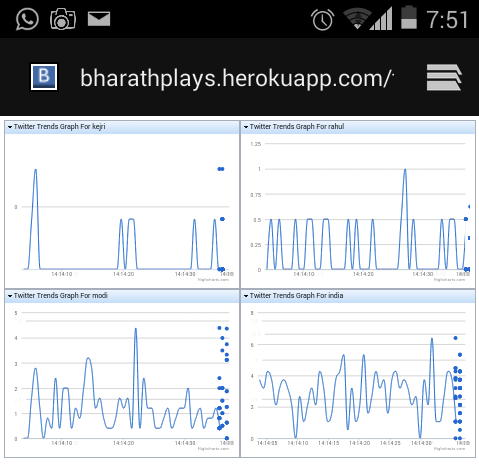 These graphs are just volumetric. I plan do some simple sentiment analysis next. However, by looking at the graphs and tweets behind them, it is heartening to see the order of popularity of each string. India is most popular among the four but next comes Modi and it is generally not far behind. Rahul seems to appear more than Kejri but both these strings trail a long way behind Modi. With me being a diehard Sri Narendra Modi supporter, these graphs and numbers certainly make me happy and hopefully bode well for the good times to come for my country :-)